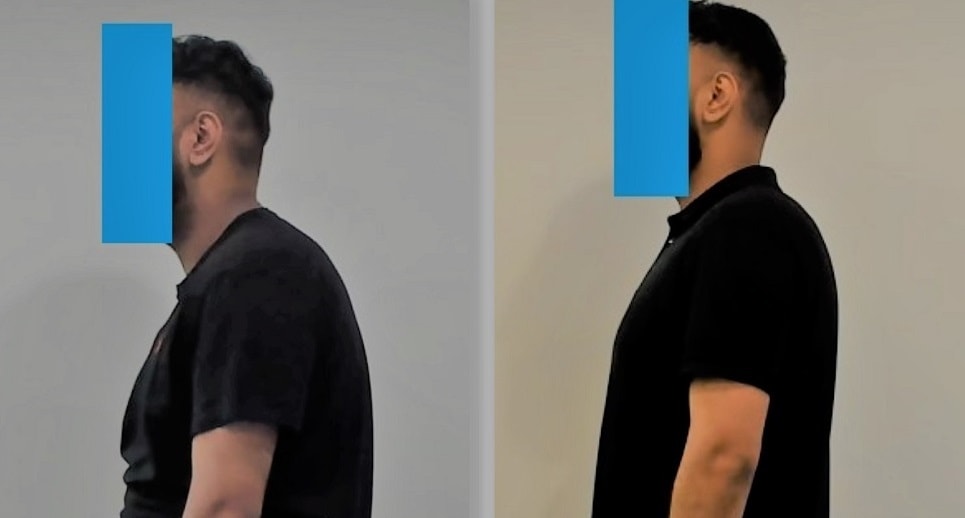 You may have read my earlier post on what disc herniations and sciatica are here.

We help these types of conditions all the time with our disc herniation treatment but, instead of me telling you about it, I thought you would like it if a client talked you through their journey instead.

Here it is in full…

– Just read my review, nothing worked beside this!.

I have been suffering from four slipped discs in the lower back since 2016. They occurred from sitting in the work office in a very bad position for months. The pain would radiate from my lower back right into my hip and leg. I was in excruciating pain and I was sent for a discectomy (surgery on the disc to remove the bulge that was pressing against my nerve). I had to wait 3 months for the pre-surgery appointment and during this time I remember taking a mass amount of codeine just to make me sleep through the pain.

During the 3 months, my pain gradually reduced and this was because my body had shifted in all sorts of directions to compensate for the pain. To be clear, my right shoulder had dropped, my hip was pushed to the right and my chest had collapsed forward resulting my head being stuck out and putting more pressure on the disc! I went to the pre-appointment and as my pain wasn’t as bad as before they said I didn’t need surgery and they discharged me.

So around 6 months went by and I was still taking my painkillers but not as much so I was able to see the day through (not sleeping). I remember any opportunity I had I would just lay on the floor as this was the most comfortable position for me and cover my back in Ice. I was just walking completely out of alignment and I recall random members of the public would come over and ask If I was ok as my hip looked like it was about to fly out, that’s how far pushed right it was (hip was pushed right as it was avoiding touching the nerve, it literally spasmed that way and it was just naturally like that). As a result of this, my right shoulder dropped and caused excruciating pain whatever I did something with my right arm such as typing. using the mouse at work or eating. This then resulted in me being off work for some time.

After a few weeks consideration, I thought I would get back to work to continue earning but I would take that many painkillers so I couldn’t feel any pain and just get on with the job. Painkillers included Naproxen 500mg and Co-Drydamol.

Whilst at work I thought about going to a Chiropractor as you see many of them always state they can help with disc, posture, nerve pain, etc. So I went to a Chiropractor based in Kidderminster (I live in Birmingham but through google search his website ticked the above points and I thought let’s give it a try.

So I went there and he did a few clicks and cracks in my neck and back and had this little pen that would just make noise and I didn’t feel like anything was happening. He then said this is what he will do for the next few months and slowly my pain will go and posture will return back to normal. Three months down the line I felt exactly the same so I didn’t go back.

So I went back to work for a few months and during this time I developed a sharp stabbing pain in my dropped shoulder in the shoulder blade and I started getting pins and needles in my face. This then worried me so I made a doctors appt who advised he would put me forward for an MRI scan on my neck. I forgot to mention prior to this I had two MRIs in my back previously, one in 2016 and the other in 2017, (one to identify the slipped disc and the other to see how it was a year after (much better than the first scan but still can see the bulge but not as much on the disc) so this would be my third. The MRI showed no compression on my neck disc so I was given more pain meds and the doctor literally said: “You don’t need surgery but we can give you an injection.” I was reluctant to the injection as it would just help me forgot about the injury and wouldn’t fix the root problem!

So I thought I would go to another chiropractor and I ended up going to one in Birmingham. He did the same as the other guy, minor manipulations but with stretches and then sent me for exercises and massages (same building). So all 3 combined did help with my pain very slightly and I felt like I was getting better so I followed his advice and kept going back for manipulations, exercises, and massages. After around a year my posture was still really bad and my pain had only reduced slightly so I asked him on this and he advised that the posture takes years and years to get back to normal and I was just losing hope thinking this guy is just taking my money and if his procedure worked surely there should be some sort of change in my posture. So after a year of his motivational speeches, getting up every 30 minutes to do squats (at home, work, everywhere!) and his manipulations that did absolutely nothing, I left!.

I then went and visited an Osteopath in Walsall who performed acupuncture which really helped but was a temporary relief. I then also visited a woman who opens your “chakras” lol random but she does a massage, again temporary pain relief. I then had a conversation with my uncle’s next-door neighbour (Mr xxxx based in Oxford, teaches other chiropractors and is quite renowned in this work) who advised by looking at the MRI and pictures I sent he could not help me at all. I then went to a chiropractor in Sutton Coldfield who said it would take a few years and he can definitely help me. Whilst being there I saw a certificate from Mr xxxx on the wall and I thought if your teacher can’t help me how on earth can you! His prices were stupidly high also and I just knew he just wanted to use me for the money! I then attended numerous sports massages, acupuncture, PT in the gym, Pilates, yoga, stretches – the whole shebang, TRUST ME NOTHING WORKED AT ALL!!

Whilst sitting at work depressed looking at my bank account and thinking of the thousands I have spent on these therapies, how bent my body has gone (actually went worse through everything I did, I blame majority of this on the Birmingham chiropractor as I stayed with him the longest and had so much belief in his system and science but, I decided to google posture correction and found Upright Body Renewal in Jewellery Quarter, Birmingham – Lucky Gidda.

I remember before attending the appointment I was researching in-depth about his method Advanced BioStructural Correction – ABC. They focus on moving the bones back into place, where they should be, I won’t go into too much detail as Lucky would be better to have a conversation with you on this but I decided to go to the first consultation.

So we went through the usual process taking pictures, tests, and prices, etc. Lucky then performed a manipulation on my shoulders and I immediately felt them go back and the pain in my neck stop. At first, I thought this guy is in it for the money BUT after this, I just knew that this method would work as I immediately felt the difference and it didn’t take years!!!

I have been going to Lucky for around 7 months now and my shoulders have come back, (my pain in my neck/shoulder is still there depending on what I do but it has reduced massively than before). My lower back is pain-free and more importantly, my posture is much more aligned!! I no longer walk with my chest collapsed, my head has come back and is facing straight and not toward the ceiling and my shoulders have come so much more back than before and my hip is so much more aligned, I actually look normal. I have gotten taller, my breathing has improved, I no longer have heart palpitations, I can sleep pain-free, I am back at football and I haven’t touched a painkiller for months. My before and after 6 months picture is shocking, I was in such a bad state before seeing Lucky. Just shows that some Chiros I previously visited know their method isn’t working but still see you as its all a business and money talks.

I still have some more work to do in order to have a close as possible perfect posture but it will happen as the method at upright really works.

Apologies for the long review but I have been looking for a review as detailed and something so close to my problems and experiences and I have never found one. I hope this review helps people trust in Lucky and the system as it really does work.

To Lucky, Cherelle and Shreena THANK YOU and see you next week.

So there you have it, a typical client’s journey before the correct treatment, and how they change once they start getting treated properly.

To find out more about Advanced BioStructural Correction watch this video.